There’s something fishy about those breast cancer campaigns..

You can find that on this page:

Note: Information will be expanded later in the sites that you already know:

The publication will continue on the existing page below:
https://rosariofatima.wordpress.com/the-history-of-our-ladys-psalter-also-known-as-rosary-150/

This research will be published in Spanish in this blog:
http://rosario150.wordpress.com/

Well, let’s start from the point where Saint Dominic began to proclaim publicly the Rosary 150 (Our Lady’s Psalter of 150 uninterrupted Aves), and Innocent III authorized the creation of the Dominican Order. During this same time a movement within the Catholic hierarchy started, called “Devotio Moderna”, by which members of religious orders began to make their own interpretations of the Bible, sought to “enlighten” somehow, among other things. It’s curious to note that this “modern movement” would disappear later, after the Protestant Reform was established (By the way, there are scholars who identify some religious who were part of this “modern devotion” as “proto-Protestants”).

“Devotio Moderna arose at the same time as Christian Humanism, a meshing of Renaissance Humanism and Christianity, and is related to German mysticism and other movements which promoted an intense personal relationship with God. Practitioners of the Devotio Moderna emphasized the inner life of the individual and promoted meditation according to certain strictures (sic). With the ideals of Christian Humanism, Devotio Moderna recommended a more individual attitude towards belief and religion. It is regarded sometimes as a contributing factor for Lutheranism and Calvinism. It was also a major influence upon Erasmus, who was brought up in this tradition.”

About the Ave prayer we are going to say the following: Originally this prayer did not include the words “Mary” and “Jesus.” This prayer was known by the name “Angelic Salutation” and it was something like this: “Hail, full of grace, the Lord is with thee, blessed art thou among women.” In the course of time, someone came up with the idea of adding Elizabeth’s greeting, then the word “Mary”. At the time of Thomas Aquinas, back in 1272-1273, using the word “Jesus” in the Hail Mary was not yet widespread. The second part of the Ave was added much later, but we will discuss that in other post. Likewise, the word “lord” is a tricky term, which we will also discuss about it on another occasion. Let’s continue with the story of Our Lady’s Psalter.

It can be said that Our Lady’s Psalter competed directly against the Psalter of 150 Lord’s prayers -even the same counting device was used for both practices-, and the mutilated version of 50 Aves. Note that for these 3 cases, the same prayers were used repeatedly. In contrast, the other “devotions” were designed for people who could read, therefore, beyond the reach of the majority of that period of time. These other “devotions” consisted of stanzas more or less associated with biblical
verses.

Something that will be seen throughout this research is the following: Over the last 8 centuries religious orders, directly or indirectly, have promoted “devotions” to divert attention from the Catholic faithful, so they don’t pray Our Lady’s Psalter. From 10-prayers devotions to the chaplet of divine mercy; from the Servite rosary to the luminous mysteries; from the Carthusian rosary to Pius V’s pentagram rosay: all these “devotions” have been a great harm for the true Catholic Faith.

Since the time of Saint Dominic until the Bull “Romani Consueverunt Pontifices” by Pius V, Our Lady’s Psalter or Rosary 150 underwent the following alterations:

During the years 1200-1300 the Psalter of Our Lady (150 uninterrupted Aves, keep that in mind), and its mutilated version (that is, the recitation of 50 Aves, known at that time as “rosary”) did not include any Lord’s prayer. There’s something very important: only the encyclical Supremi Apostolatus Officio Leo XIII published in 1883 mentioned the following: “There is a very pious rite which, to protect against the dangers that threaten the world, consists of reciting the Ave many times … as the Psalms of David (150) “, words attributed to Urban IV, written in 1264, and we never heard of it before and after 1883. From what we conclude that Leo XIII, as well as other occupants of the chair of St. Peter, has hidden crucial information for the Catholic Church.

Pay attention to this: the “devotions” addressed to “Mary”, which consisted of 150 verses in the case of the Psalters and 50 for the rosaries, were usually integrated as follows: the first 50 prayers began with the word “Ave”, the second 50 started with the word “Salve”, and the last 50 with the word “Gaude”. Psalters and rosaries for the Jewish Jesus had a very similar structure, except for these 3 words: Ave, Salve, Gaude, which were not included. From the Catholic point of view, the problem arose when religious orders began to mix these devotions, to the detriment of the Psalter of Our Lady (which we know as Holy Rosary 150).

Some self-proclaimed “mystical” guys emerged from the “Modern Devotion” and were influenced by works such as “The Imitation of Christ”, one of them was the Carthusian Henry of Kalkar. Probably between 1367-1384 (or so) he began to spread among his ecclesiastical friends the version of the Psalter created by him, which grouped the Ave beads in tens, and divided each 10 Aves with a bigger bead for praying one Lord’s prayer. He wrote a work named “Psalterium 150 continens dictiones B. Virginis”, surely the explanation for this modification is written on it. He did that because “Mary” asked him to do so. Perhaps that’s the reason the Dominican rosary contains 15 Lord’s prayer beads and the 150 Ave beads in a single counting device.

There was a time when it was believed that the first part of the Ave was not a prayer by itself, but just a greeting. Then some people began to add a few lines, stanzas, as they say, to make the Ave sound better. The first experiment was to aggregate after the word “Jesus” some biblical description (a clear influence of the Psalter of Jesus). This was the work of the Carthusian Dominic of Prussia, back in the years 1409- 1415 – it is said that it took him a bit time, up to 1439 or more- who created 50 verses at the beginning, then completed 150 stanzas .Dominic of Prussia talks about this on his “Liber experientiarum” or “experientiae “.

Meanwhile, there are two “devotions” born among some religious orders that made things more complicated: the Crown of the 7 Joys, by a Franciscan back in 1422, and the Crown of 7 Sorrows, promoted by the Servites. Some say this “devotion” of the 7 sorrows arose during the 13th century, I have my doubts about it; probably was created in the early 15th century.

A bonus: During the time of Alanus de Rupe the so-called “Mysteries of the Rosary” did not exist yet. He even advocated for praying the Psalter of 150 Aves, because he claimed that praying only 50 Aves -as the Carthusians did- was a threat to the traditional Our Lady’s Psalter (the Rosary 150). He was right about that.

And what did the occupants of St. Peter’s Chair say about it? Oh surprise, the first mention after 1264 comes from Sixtus IV:

Bull Ea quae ex fidelium, by Sixtus IV, May the 12th, 1479: In this bull indulgences to those who recite the Psalter of 150 Aves are exposed (please notice that in the text Our Lady and “Mary” are intermingled). And also it’s written that the 150 Aves are divided into tens, and between each decade a Lord’s prayer is inserted. We know where those changes come from. Why the insistence on inserting those lord’s prayers? Second surprise: Sixtus IV believed that the kabbalah was good for Catholicism.

Bula Pastoris aeterni, by Leo X, October the 9th, 1520: indulgences are granted. No mysteries are mentioned, the 150 Aves are divided into tens and separated by Lord’s prayers; however, the terms “Psalter” and “rosary” began to be used indistinctly. Keep in mind that at this time “rosary” was used for referring a set of 50 prayers.

Bula Etsi temporalium cura nos, by Clement VII, May the 8th, 1534: Rosary confraternities were approved and indulgences were granted . In this bull Clement VII refers to the two previous bulls, written by Sixtus IV and Leo X. Although it’s required to recite the 150 Ave entirely, later in the same text it’s allowed to pray in three parts of 50 Aves each. This version does not include mysteries.

The previously mentioned bull Consueverunt Pontifices romani, by Pius V, September the 17th, 1569: a string of 5 groups of 10 beads for praying the Aves, separated by 5 bigger beads for praying the Lord’s prayer; on those 5 paternoster beads the mysteries of the biblical Jesus are meditated. Check how Our Lady’s Psalter became into Pius V rosary. The famous 15 mysteries were taken from: a) the rosary of Dominic of Prussia, b) the Franciscan rosary of the 7 Joys, and c) the Servite rosary of 7 Sorrows; These 3 devotions are derived in one way or another of the Psalters of Jesus and Mary. The insertion of the Lord’s prayers are derived from the rosary of Henry of Kalkar, who must have been influenced by the 150 paternoster practice. 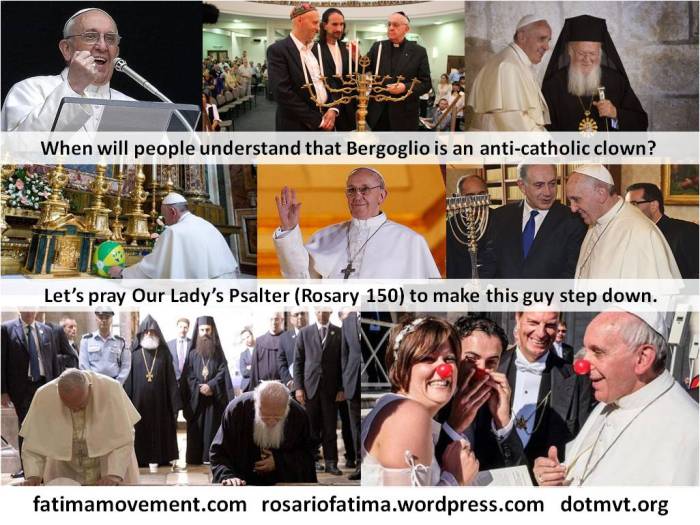 Now the Ave Prayer in Spanish, translated from the Latin version:

There are two changes

The word “Santa” (saint) is used instead of “bendita” (blessed); heretics and freemasons employ this particular term (blessings) in a materialistic way.

The word “ora” (in latin for the Spanish “ruega” and for the English “pray”). We use the word “salva” (“save” in English) because it confirms the fact that Our Lady is God. 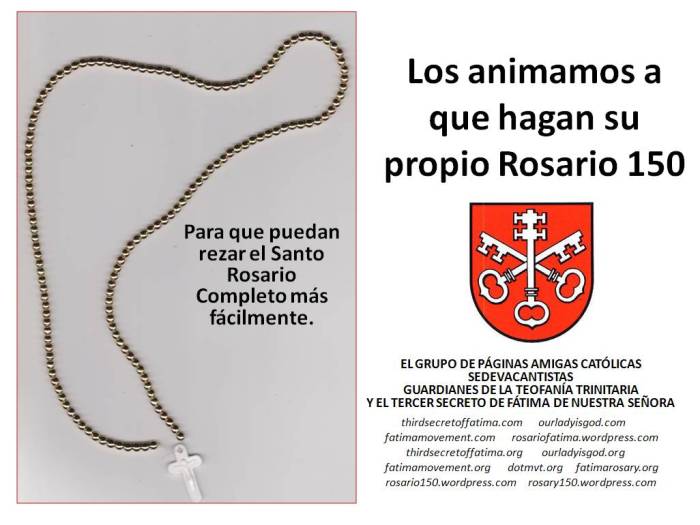 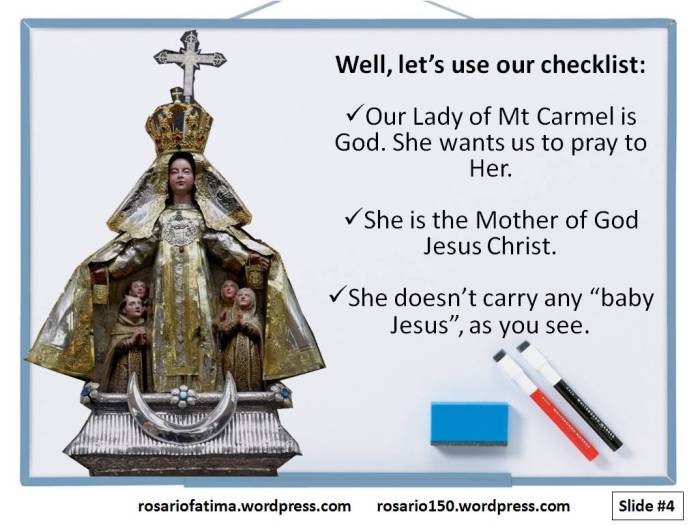 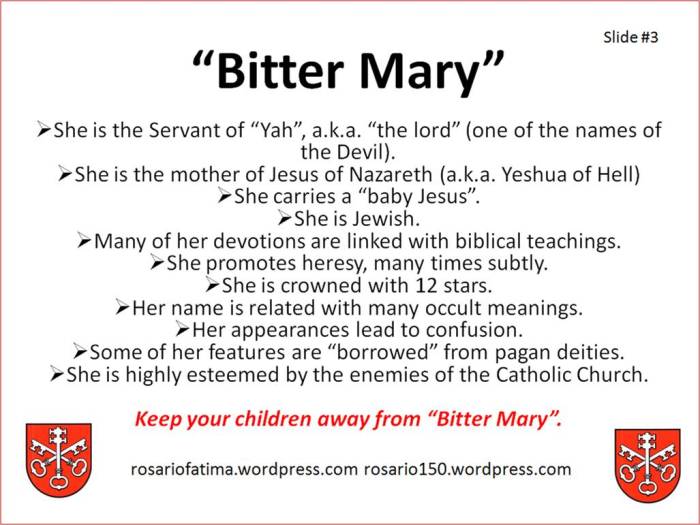